SubMerge is nominated for the Aquatech Innovation Award category ‘innovation not to market yet’.

The Award at Aquatech Amsterdam

For many years, the Aquatech Innovation Award has been granted to the most innovative product, service or solution in the water industry. The winner will be selected from a line-up of top-notch innovative technologies, most of them world firsts, by an expert jury. The contenders compete for the overall title, and the winner will be revealed during the opening ceremony of Aquatech Amsterdam on 1 November.

Our autonomous inspection robot creates radical change in water pipe network management. It can precisely determine the condition of drinking water pipes, using a camera, ultrasonic sensor, hydrophone and positioning algorithm. The robot is able to flexible craw trough drinking water pipes. Following its navigation mission and operating below surface level, the robot makes its own decisions and movements. The robots craws from base station to base station. Reaching a base station, the robot gets recharged, exchanges its data and proceeds with a new mission. 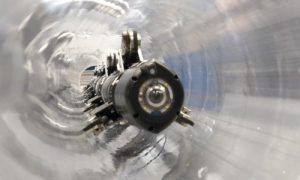 Each year 1.2% of the European drinking water network has to be replaced. Globally 45 million m³/day drinking water leaks away. Our autonomous inspection robot makes it possible to:

The autonomous inspection robot is unique to other technics due to its:

Current manual inspection methods are to expensive. Because of that replacement programs are mainly based on prediction models. The autonomic inspection radically reduces inspection costs, making it possible to act on real pipe conditions.

Vitens, Evides and Brabant Water instructed Demcon to develop the robot. At the end of next year the first robots are inspecting our water network.