The Aquatech Innovation Award recognises world-class innovation and technologies that have the potential to move the global water market forward. The expert jury selected SubMerge Autonomous Inspection Robot as the overall winner out of 50 entries from the global water sector. 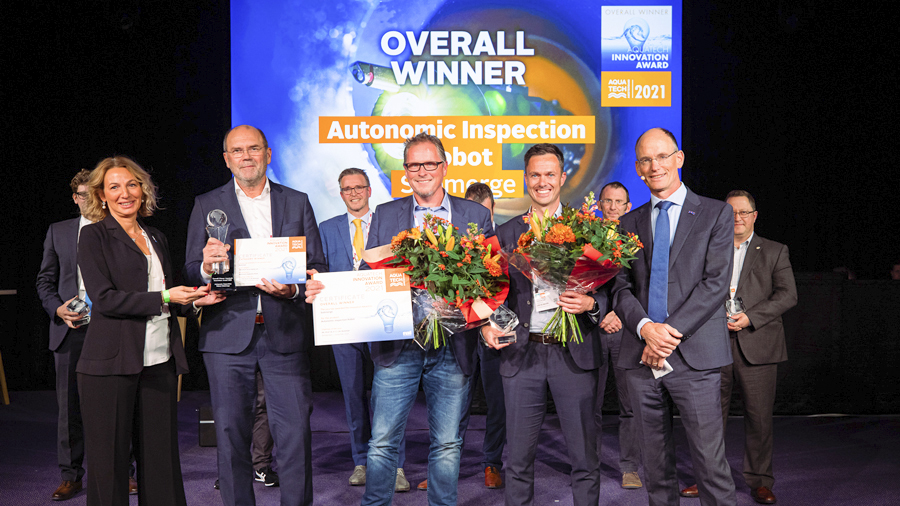 The jury explained – “In previous editions, many award entries are improvements of long-term technologies that we have seen before. However, this year, there were many remarkably new innovations. One notable innovation was the Submerge robot that can enter pipes. The unique element about this innovation is that the robot can manoeuvre around corners, which is special because normally robots travel forwards in straight lines.”

“This project was also developed together with end-users, linking the public and private sectors by bringing together technology companies and water utilities. As a result, the robot has been carefully thought through with multiple functionalities. For example, it can help detect leaks, corrosions and even be used to map pipe networks to create a digital twin. It’s very important for piping companies to know exactly where the pipes are located, which isn’t always the case at the moment.”

The SubMerge team is extremely grateful to receive the 2021 Aquatech Innovation Award and is on the lookout for industrial partners to commercialize the Autonomous Inspection Robot.

SubMerge is an autonomous inspection robot that changes drinking water pipe asset management radically. The robot craws flexible trough water pipes. It makes pictures, measures wall thickness, determines leakages and calculates coordinates. The robot autonomically moves from base station to base station. Reaching a base station the robot gets recharged, exchanges its data and proceeds with a new mission.

Each year 1.2% of the European drinking water network must be replaced. Globally 45 million m³/day drinking water leaks away. Replacement programs are mainly based on historical models. SubMerge can radically reduce inspection costs, making it possible to act on real pipe conditions. It can save millions of Euros by preventing to early/late pipe replacement.

The autonomous inspection robot makes it possible to:

The autonomic inspection robot is unique to other technics due to its: